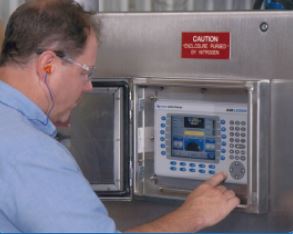 In 2016, Case Controls was recruited to help upgrade a compressed air system at the AcelorMittal Indiana Harbor steel mill. The plant had recently revamped its No. 2 continuous caster machine, and the compressed air upgrade was necessary to support the machine’s air mist system for secondary cooling.

In fact, many of the improvements we made to improve system reliability also benefit its efficiency, and vice versa.

In the upgraded compressed air system, the IAH is supplied by two of the plant’s existing Sullair fixed-speed 400-hp rotary screw compressors. These compressors were outfitted with Case Controls’ own AirStar™ PD PLC-based local controls.

The two headers are tied together and connected via a modulating crossover valve.

The addition of this crossover valve ultimately benefited both the reliability and efficiency of the system, but its installation posed a few unique challenges. To begin with, the valve had to be large enough to allow the AMH to supply air at the capacity of the compressors on the IAH, plus a 20 percent buffer. Because the air from the AMH compressors was not dried, the crossover valve also required an additional small dryer to supply dry control air to the IAH.

The position of the crossover valve is governed by a master PLC, which facilitates load sharing between the two headers and provides connectivity to caster networks for alarming and data collection of system variables. The primary goal of the load-sharing system is to stabilize the IAH and prevent rotary screw short-cycling. Of the two headers, the IAH is most critical to the plant, so it takes priority when there are not enough compressors to keep both headers at their pressure setpoints.

The crossover valve also prioritizes providing air from the AMH to the IAH, because the two rotary screw compressors that feed the IAH are older, less efficient and less reliable. As such, air is only shared from the IAH to the AMH if the header pressure setpoint can be maintained on the IAH.

The new automation system operates on a two-level failover philosophy that’s loosely based on IT networking applications.

A failover exists within each of the two headers, as well as another between the two headers thanks to the crossover valve. In the event that one compressor on either header fails, a backup is automatically brought online and the plant personnel are alerted to the problem. The automation system also saves energy by keeping only the required amount of compressor horsepower online at any given time.

As it turns out, it didn’t take long for the new compressed air system to demonstrate its improved reliability.

Soon after the installation was completed in December 2016, a block valve on the exit of one of the centrifugal compressors was closed, causing it to surge and shut down. The system automatically started and loaded another compressor into the header, and the system pressure never fell low enough to stop the casting process during the incident. It has also become standard operating procedure at the plant to share air from the AMH to the IAH and not run the older rotary screw compressors on that header whenever possible.

Interested in learning more about how the team at Case Controls can make your compressed air system more efficient and reliable? Feel free to give us a call at (812) 422-2422 or contact us online today!