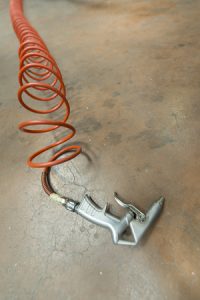 In factories and other industrial settings, it’s not uncommon to see workers remove dust and debris from their clothing and skin using compressed air guns. While this might seem like an innocuous and practical method of cleaning off after a long day of work, compressed air can actually cause severe injuries and even death when not used properly. In fact, the Occupational Safety and Health Administration (OSHA) heavily regulates the use of compressed air for cleaning purposes to prevent workplace injuries.

When high-pressure compressed air is used to clean skin and clothing, it can penetrate the skin and enter the bloodstream. This, in turn, can cause blood vessels to become blocked by air bubbles, triggering stroke-like symptoms. If left untreated, an air embolism can lead to coma, paralysis and death. Air embolisms are commonly associated with decompression sickness in divers, but they can just as easily be caused by compressed air accidents as well.

Similar to an air embolism, this type of injury occurs when a high-pressure fluid creates a small puncture wound in the skin, injecting the fluid into the body and causing extensive soft tissue damage. The injury may seem minor at first, but become far more serious in the hours following the incident. You don’t have to look far to find some pretty gruesome examples of injection injuries on the Internet. These injuries often occur when paints, solvents or fuel oils are injected into the skin, but they can also be caused by the injection of high-pressure air alone. In severe cases, an injection injury may result in the loss of a limb.

When compressed air is used to blow off debris, it can also cause “chip fly-back,” where small pieces of flying debris cause bodily harm to the operator or other nearby workers. In these incidents, flying debris—even very small particles of dust – can cause debilitating eye injuries. As such, it’s essential for operators to employ effective chip guard barriers that block flying debris to prevent injuries.

To begin with, OSHA requires that compressed air “shall not be used for cleaning purposes except where reduced to less than 30 PSI.” Factory air lines typically run between 80 and 120 PSI, which is far too high to be used for personal cleaning purposes. Furthermore, OSHA requires that when air lines are dead-ended (blocked), the static pressure at the point of the blockage may not exceed 30 PSI. Some air gun nozzles also include dead-ending safety features which allow airflow to exit through side ports when the nozzle tip is blocked.

In addition to standard chip guards, protective cone air nozzles can also be used to prevent chip fly-back. In these nozzles, some of the airflow is diverted to slots around periphery of the nozzle to form a protective cone of air that prevents debris from flying back towards the operator. It’s important to note, however, that these nozzles may not prevent debris from being propelled towards other nearby workers. Therefore, they should always be used in conjunction with physical chip barriers.

Finally, OSHA suggests that pneumatic vacuums should be used as an alternative to compressed air systems for self-cleaning purposes. These vacuums can effectively remove most dust and debris without posing a threat of air embolism, injection injury or chip fly-back.

Interested in learning more about compressed air systems and their operation? Stay tuned for the latest updates from our blog, or give us a call today at (812) 422-2422 to speak with a representative at Case Controls!